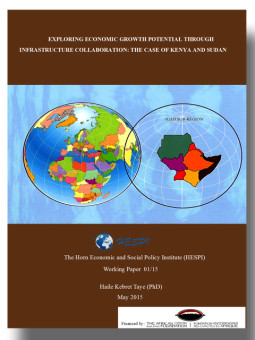 Exploring Economic Growth Potential through Infrastructure collaboration: the case of Kenya and Sudan 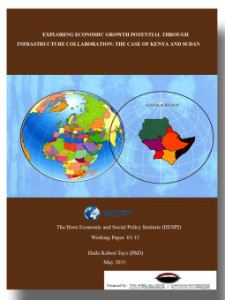 African countries have been actively seeking both bilateral collaboration and continental unity since the 1950s. Such efforts focused on trade in finished goods but less on infrastructure collaboration. The objective of this study is to (a) examine the impact of hydropower consumption on economic growth in Kenya and Sudan, as a case study; and (b) indirectly infer its potential to strengthen economic cooperation among African countries if and when such mutual benefits pave the way via infrastructure collaboration. This is based on the rationale that such mutual benefits generate an incentive compatible engagement that will have the potential for countries to lock-in such benefits.

The approach used is a basic growth model in which output (GDP) is determined by capital, labor. Energy is also included as an additional input to the two conventional inputs. To estimate this model, a co-integration approach using an auto regressive distributive lag (ARDL) model and data from 1971 to 2012 is used.

The results seems to support the hypothesis that energy consumption is an input to economic growth as a complement to the conventional factors of production; it suggested that the direct impact of a unit increase in hydroelectric consumption on  GDP growth of Kenya and Sudan in the long-run is about 0.7% and about 0.6%, respectively. Similarly, its contribution is less in the short-run than in the long run but it is still likely to boost growth by about 0.34 and 0.24 per cent, respectively.

All trade theories suggest that the basis for sustained trade linkages among countries is gains from trade transactions. Hence mutual gains from infrastructure linkages are expected to both boost further economic linkages and ultimately strengthen regional integration, in countries such as Ethiopia, Kenya and Sudan.