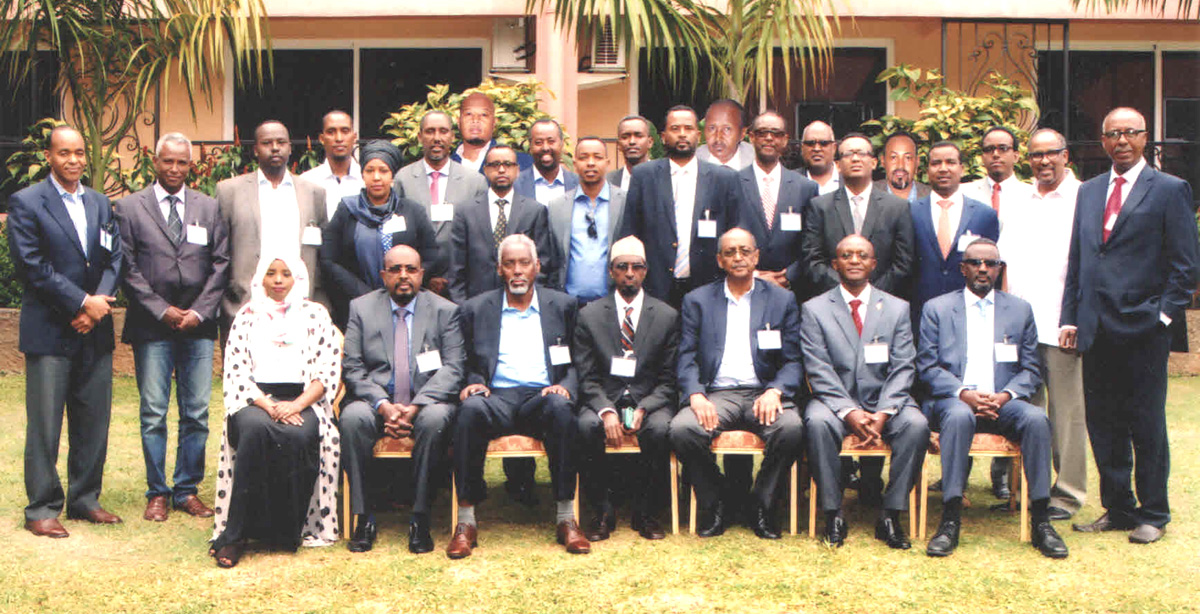 Representatives from the Federal Government of Somalia, existing member states and those in the process of formation held the first consultative meeting of the Somalia Federalism Network (SFN), with HESPI support, to discuss the key elements of cooperative federalism in Somalia. The participants at the meeting also included members of parliament and political leaders, scholars and change agents who articulated the challenges and prospects to building a viable and federal state

The first consultative meeting of the Somalia Federalism Network took place at Entebbe, Uganda on July 9-11, 2016. The SFN was established at the conclusion of a conference attended by a cross section of the Somali public and policy makers including from the Federal Ministry of Interior, senior representatives of the regional administrations in existence and those in the process of formation as well as members of parliament and civil society organizations in December, 2015.

The purpose of the establishment of the SFN is to (i) enhance cooperation and dialogue among the Member States and between them and the Federal government; (ii) spread knowledge of optimal aspects of viable and effective federalism in Somalia, and (iii) empower constituents with evidence-based research and promote horizontal and vertical communication and consensus building

The meetings consisted of a 2-day intensive seminar format on key federalism issues, including:

(i) Presentation on the foundational basis of cooperative federalism and the intergovernmental relations relevant to a workable federal arrangement as articulated in the Provisional Constitution of Somalia adopted in August, 2012. The presentations also included reflections on division of powers, between the federal units and the central government, in a future federal Somalia; exclusive powers/functions, concurrent powers/functions and residual powers.

(ii) Presentation by senior official of the regional states on the status of the state formation process in Juba land and Gulmudug states including democratization, legislative institutions, stability and security, and judiciary. As the Provisional Constitution adopted in August 2012 recognizes only two levels of government, the Federal Government and the Member States level and leaves local governments’ roles and responsibilities to member state governments, the discussion also addressed local governance within the federal architecture adopted by Somalia, within an international perspective

(iii)  The status of the state formation process: A baseline study by the group.

The participants were assigned to conduct baseline studies of specific regions on the status of state formation process and their constitutional readiness for membership in the proposed federation. They were provided with a working template that will guide the studies and informed assistance will be available with the methodology of the research. The baseline studies are expected to be completed by the end of September 2016. Upon conclusion of the project at the end of July 2016, the baseline studies will be made into a booklet on the status of the state formation and the federation processes. The booklet will then guide the work-plan of the SFN, which shall be completed during the second meeting of the SFN, tentatively scheduled to take place before end-2016. The booklet will be shared with policy makers in Somalia and the country’s international development partners.

(iv)  A paper on “Fiscal Federalism and Decentralization in selected IGAD member countries” was presented at the second day of the meetings, and covered the status of devolution of power and resources sharing in several countries in the sub region. The paper emphasized that transitioning to effective fiscal federal system under a constitutional negotiations should be guided by six important pillars: Institutional Architecture, Expenditure Arrangements, Tax Assignment, Intergovernmental Transfers, Functional and Administrative Capacity, and Institutional Arrangements. There was also discussion of the practices of fiscal federalism in the emerging states of “Jubbaland, Galmudug and Southwest” Somalia, which was presented with promising outlook of integrated, modern and advanced financial systems in existence in these regional states.

(v)   At the closing session, the participants discussed the processes of formalizing the operations of the Somali Federalism Network and selection of its coordinating leadership. The participants agreed to form a team comprising a chairperson and deputy of the Network that will be reviewed at the time of its second meeting before end- 2016.

[1] This meeting was a follow up to two meetings that took place respectively in Addis in 2014 and Djibouti in 2015, facilitated by HESPI.