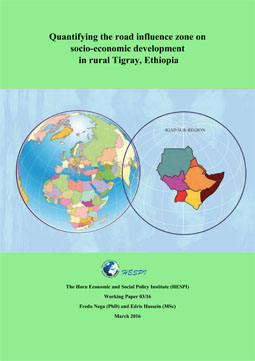 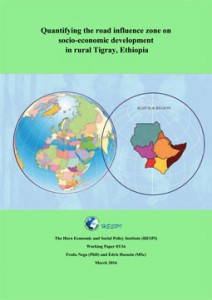 Rural roads are very important for economic development, especially in rural areas. Empirical studies confirmed that rural roads provide safe and efficient human mobility, enhance access to markets for inputs such as fertilizers and improved seeds, enable framers to sell their produce to nearby markets through a reduction in transport fare and time, and allow farmers to achieve additional non-farm employment opportunities, leading to a rise in income and reduce poverty.

Most empirical evidences on impact of roads on socio economic conditions are analyzed using quazi-experimental methods and on wealth differentiated approaches. However, roads can influence rural communities differently depending on their distance from the road. Attempts to delineate the road influence on the basis of distance from road, understand threshold type trends and map the influence zone on socio-economic outcomes are scanty at best. Road influence zone, which is defined as the area in which significant ecological, environmental and socio-economic effects extend outward from a road, has been used to analyze influence of roads on ecological and environmental effects of road but not on socio-economic conditions.

In the first study of its kind, we measured the extent and type of relationship underlying the road-influence zone of rural roads on socio-economic outcomes. Both positive and negative socio-economic effects of roads are used for analysis. Accordingly, for the positive socio-economic outcomes, four indicators namely trip per capita, use of fertilizers, motorized transport and commercial activities; and for negative effects of roads, three indicators road dust, flooding and erosion, have been used in the analysis.

We selected two rural roads constructed under the URRAP program, and two regional highways. 529 households from four tabias have been surveyed and we used piecewise and linear regressions to determine delineation of road influence zones. Except for number of trips per capita and erosion, threshold effects have been observed for the rest of the socio-economic outcomes analyzed. The road influence zone occurs at different distance from the road for the different socio-economic outcomes. It ranges from 200 to 240 meters on both sides of the road in the case of road dust to about 2.6 km in the case of motorized transport. The results of our study suggest that socio-economic impacts of roads differ not only on socio-economic and wealth differences of households but also on distance of households from road.