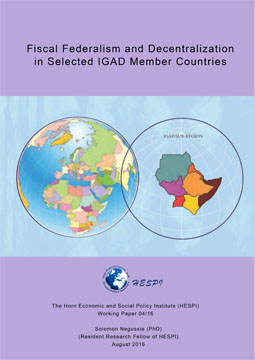 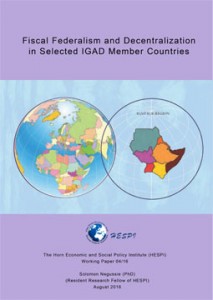 Fiscal  federalism  -  the  fiscal  implications  of  a  decentralized  system  of  multi-level government – is an important component of governance in a federal  or a decentralized system. Among the aspects of fiscal federalism to be assessed are the constitutional and political context, the allocation and the scope of federal, state and local revenues and expenditures, the nature and scope of intergovernmental transfers, equalization arrangements and institutional architecture for the participation of constituent units at the federal/national level.  This  study of  fiscal  federalism  in  the  IGAD region  focuses  on  the four  member countries - Ethiopia, Kenya, South Sudan  and  Somalia.   Although these countries have incorporated some or all principles of fiscal federalism in their federal or devolved constitution, obviously each country is unique in its own way.

There are significant differences in the constitutional and political context within which fiscal federalism operates or should operate in each of the four member countries. Ethiopia put in place a federal system and practiced fiscal federalism for more than two decades. Kenya, though not new to a decentralized system, introduced fundamental changes in its devolved system of  government through  a new Constitution adopted in August  2010, which  also changes the fiscal structure. Somalia and South Sudan are fragile states struggling to maintain a stable government and a workable structure of fiscal federalism. This study pulls together the four countries to identify the opportunities and the challenges for successful fiscal arrangements.  The available theoretical and empirical literature on fiscal federalism will be assessed to identify lessons that may be drawn. In considering the lessons that may be learned, attention will be given to the criteria of equity, autonomy, accountability, political stability and intergovernmental relations between the levels of government.