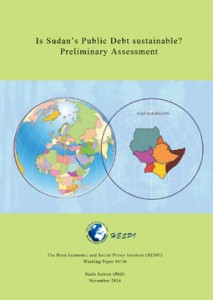 The motivation of this study is the recently launched global agenda of SDGs goals (17.4) that proposes to “Assist developing countries in attaining long-term debt sustainability; this is to be attained through coordinated policies aimed at fostering debt financing, debt relief and debt restructuring, as appropriate, and address the external debt of highly indebted poor countries to reduce debt distress”. The current state of debt in Sudan falls in his category.

To this effect, the paper briefly reviews the general approaches to address debt sustainability both from a theoretical and empirical perspectives. It further reviews the economy of Sudan as a background to the study. Finally it calculated the extent to which Sudan’s debt is likely to be sustainable. It carried out the exercise under different economic growth scenarios.

First, it attempted to examine the sustainability of Sudan’s debt using two conventional approaches. The first approach used an econometrics technique to test the stationarity using co-integration of government revenue and expenditures, since this has been one of the approaches in the literature. Second both a crude and more elaborate tests that focused on non-econometric approaches have also been carried out. All the crude indicators suggest similar results in that Sudan’s debt is not sustainable. And the more elaborate approach that attempted to trace the dynamic path of fiscal deficits and debt under various growth scenarios indicated that sustainability will require a growth rate of GDP in Sudan that exceeds the historical national and regional average of 4%. Both approaches, therefore, suggest that under the attendant economic environment, Sudan’s debt is unlikely to be sustainable

To gauge the sensitivity of the dynamic path, the exercise also considered (a) if Sudan’s debt to GDP ratio is only 80% (as some reports suggest instead of the 96%), and (2) what would happen to the sustainability path if interest rate on both domestic and concessional loans increased by 2 percentage points. There is potentially a menu of sensitivity tests that could be carried out (changes in exchange rate for instance) to check the extent to which the result is sensitive to possible changes to the parameters used. But the study limited itself to the above tests.

In sum, all the approaches seem to suggest the same conclusion regarding the sustainability of the accumulated debt in Sudan.  Unless donners are willing to lend more than the real value of the existing amount or cancel its debt under the Advanced HIPCs initiative, Sudan’s economy has to grow by more than 4% to register a surplus in its budget balance or could only afford a small deficit as a share of its GDP if it wants to even modestly sustain its attendant debt whether it is 96% or the lower level of 80% of GDP.