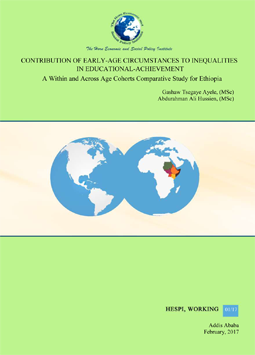 Contribution of Early-Age Circumstances to Inequalities in Educational-Achievement: A Within and Across Age Cohorts Comparative Study for Ethiopia 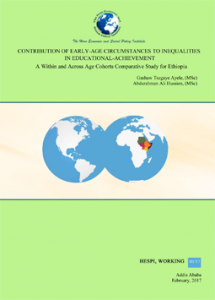 The academic evaluation system that focuses on rewarding students with high achievements and penalizing the low achievers by only looking at their test scores is misleading and unjust. First, inequality due to predetermined child circumstances should be leveled across children. Inequality that remains is likely to be attributed to children’s own effort differentials. Using Young Lives four-round dataset that tracked children of age 1and 8 in 2002 (=age 12 and 19 in 2013), we measured overall educational-achievement inequalities in Ethiopia and further decomposed it into its sources-circumstance and effort. We also observed the dynamics as children grow older. Standardized Test Score/ STS is used to proxy for educational achievements (average z-score in mathematics, PPVT, and language tests). Overall educational achievement inequality is measured with Gini Coefficient, and the decomposition into circumstances and effort is done using General Entropy measures. Despite recent improvements, Early-age circumstances remains a challenge to bringing justice in educational outcomes in Ethiopia. It is found that the Gini coefficient, that measures overall inequality in educational achievement, rests between 0.35 and 0.38 for all survey rounds.  And early childhood circumstance explains significant part of later-age educational achievements. At age 12, in 2006, circumstances accounted for at least 31 percent of the overall inequality. In 2013, for the same age, the share of circumstance falls to 21 percent. In the later year, we observed slight reductions in the inequality effects of few circumstance variables such as parental wealth and child site (rural or urban), while the rest of the variables remained significant inequality escalators. Yet, at the age of 19, the share reached to 37 percent to suspect that early-age circumstances have increasing effect as a child grows to full adulthood. Parental wealth and education are found to be the principal drivers of circumstance induced inequalities. We suggest, Ethiopia needs to invest to ensure quality and equitable education beyond a focus on overall educational outreach as evidenced by weak association between grade attainments and test achievements. A targeted intervention to reward effort and to equalize circumstances need to be put in place. Affirmative action in educational admission alone will not help, when about a third of test achievements are explained by circumstances. It rather calls for policies meant to address the root causes of such inequalities.