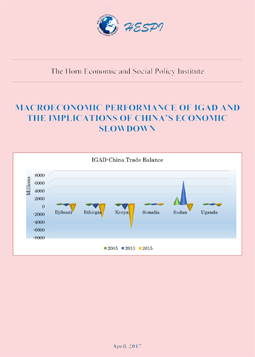 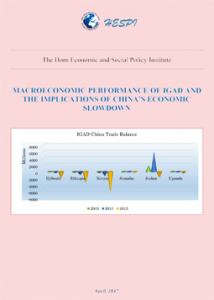 The Inter-Governmental Authority on Development (IGAD) as one of the relatively newly constituted regional block is composed of diverse countries with varied economic structures and agro-ecological zones. Member states (that includes Djibouti, Eritrea, Ethiopia, Kenya, Somalia, Sudan and Uganda) also vary in terms of population sizes ranging from the second most populous country in Sub-Saharan Africa (Ethiopia) to a country with a population of less than a million  (Djibouti). The state of security in each of the countries is also mixed ranging from relatively stable states to others engulfed with political turmoil. The levels of development as measured by income also vary ranging from Least Developed to Middle Income countries.

As a whole, the IGAD region lags behind other Regional Economic Communities (RECs) in the continent or elsewhere measured in terms of income level attained to date, the level of trade flows  (global and regional) registered, the economic diversity of the countries, the level of financial depth and the economic efficiency with which the economies of the region operate. This issue will be discussed in relation to the performance of the global economy in general and the economic slowdown in China in particular in Part II of this report, suffice it to say here that the current state of these economies are both weak and vulnerable to external and instability and various natural or man-made shocks.  In addition to that it includes countries in which the current political stability is less conducive for a stable macroeconomic environment (in South Sudan and Somalia, for instance). Despite these apparent weaknesses, the region’s potential is quite huge because of the following attributes. Among these resources is the yet to be fully exploited size of livestock[1]  that exists in the IGAD region. The livestock sector contributes nearly 60 percent to the combined agricultural GDP of the IGAD sub-region, ranging from 20 percent in Uganda to close to 90 percent in Somalia; the sector is also the main source of livelihood for close to 40 million population across the region (FAO, n.d).

The IGAD region also has a young and growing population with a potential for market expansion and entrepreneurial skills. About half of the population is below the age of thirty. As shown in Appendix 3, the size of the population of the eight member countries is projected at half a billion (out of the two billion in Sub Saharan Africa) by 2050. This is the case since the growth rate is also comparable to the rest of Sub-Sahara African countries (SSA). This indicates that the region is one of the highly populated regions and has a huge customer base and young population with a potentially active labor force. These attributes are likely to expand the domestic market and attract investors to expand production and sale of goods and services both for the domestic market and exports.   Such an attribute coupled with the huge natural resource believed to exist in the region points to a promising prospect for the region once political stability is obtained and the existing administrative problems are addressed and the economic bottlenecks are removed.  That is, the region has a long way to go to address the current obstacles it faced and when these are addressed, the region has a bright future.

It has to be noted that population pressure is viewed as positive contributor to a sustained economic growth. But this is only true when the transition is managed properly or economic and population growth rates move in tandem or are synchronized. That is, if and when population growth significantly exceeds the economy’s ability to absorb the existing labor force, it chokes economic growth rather than helping its progress.  In fact this may even hamper stability of the political economy of any country facing such a miss-match, as seems to create some pressure in some IGAD member countries. In particular, a population structure that is skewed towards the young age group (as is the case with most IGAD countries with a population of about 60% still below the age 30) creates both a huge dependency ratio and excess unemployment even under normal circumstances.  This embodies both political and economic problems, at least in the transition, before economies find a way of finding jobs for such an uneven distribution of the population.

In what follows, after assessing the performance of the macro-economy in Part I. Part II will examine recent developments in the global economy,  in particular, the likely impact of the economic slowdown and rebalancing in China on the economies of IGAD countries that have established substantial close economic relationships, particularly in trade, investment and infrastructure development.

[1] This is a sector that needs further research, a comprehensive and careful study for the IGAD member countries to fully, efficiently utilize this huge resource in the region. HESPI plans to explore the role and importance of this sector in detail in its future research.