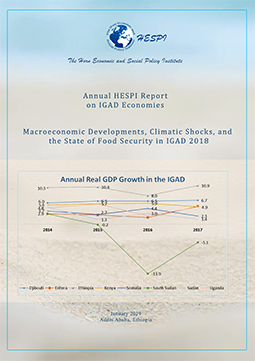 The Intergovernmental Authority for Development (IGAD) is a regional bloc formed by eight countries in the horn of Africa (Djibouti, Eritrea, Ethiopia, Kenya, Somalia, Sudan, South Sudan, and Uganda). The region is highly vulnerable to recurrent climatic and human-made shocks. Historically, social crisis and loss of lives from such shocks have been massive. Recent experiences, however, are promising in that joint efforts of governments, regional institutions, development partners, humanitarian organizations, donor communities, have managed to curtail the climatic shocks from causing excessive damage to the Region. This is only a marginal improvement. Addressing the root causes and ensuring institutional capabilities within the region is among the top policy agendas of the IGAD region. Building resilience, improving early warning systems and response mechanisms are prime institutional deficits in the Region. The IGAD member governments, the IGAD Secretariat, and development partners are joining hands in the process of building regional and country-specific institutional frameworks, devising sustainable financing, and improving disaster early warning systems and responses.

This report on IGAD Economies has, thus, picked the state of climatic shocks and food security as a timely thematic topic worth reviewing. The report also provides an overview of the macroeconomic landscape of the Region.  The first part of the report highlights key developments in the IGAD economies.

The macroeconomic review covers selected indicators that help observe developments through time and comparisons across countries. In the year 2017, economic growth in the IGAD was uneven that some countries continued their positive growth trajectory, while a few others registered either low or negative growth. Inflation was less of a problem for the year, and most of the countries contained their respective monetary growths at a non- inflationary level. Inflation in the Region has generally been structural in nature. Current account and fiscal deficits and the associated accumulation of debt arrears remain a challenge. The foreign reserve positions are low for most of the countries that foreign currency crunches have been a hindrance to exchange rate stabilization. The sluggish growth in the manufacturing sub-sector, and more broadly the industrial sector is another long term challenge for the region.

The second part of the report summarizes the state of climatic shocks, the prevailing response mechanisms, and progresses so far in coordinating efforts of several stakeholders. The findings highlighted increased stakeholders’ commitments and commendable results so far achieved in emergency responses, with all its shortcomings. The pervasive nature of the problems (climatic shocks, mainly drought and flood), however, necessitates deepening of efforts to ensure robust developments that enhance countries capabilities in preventing and efficiently responding to climatic disasters.