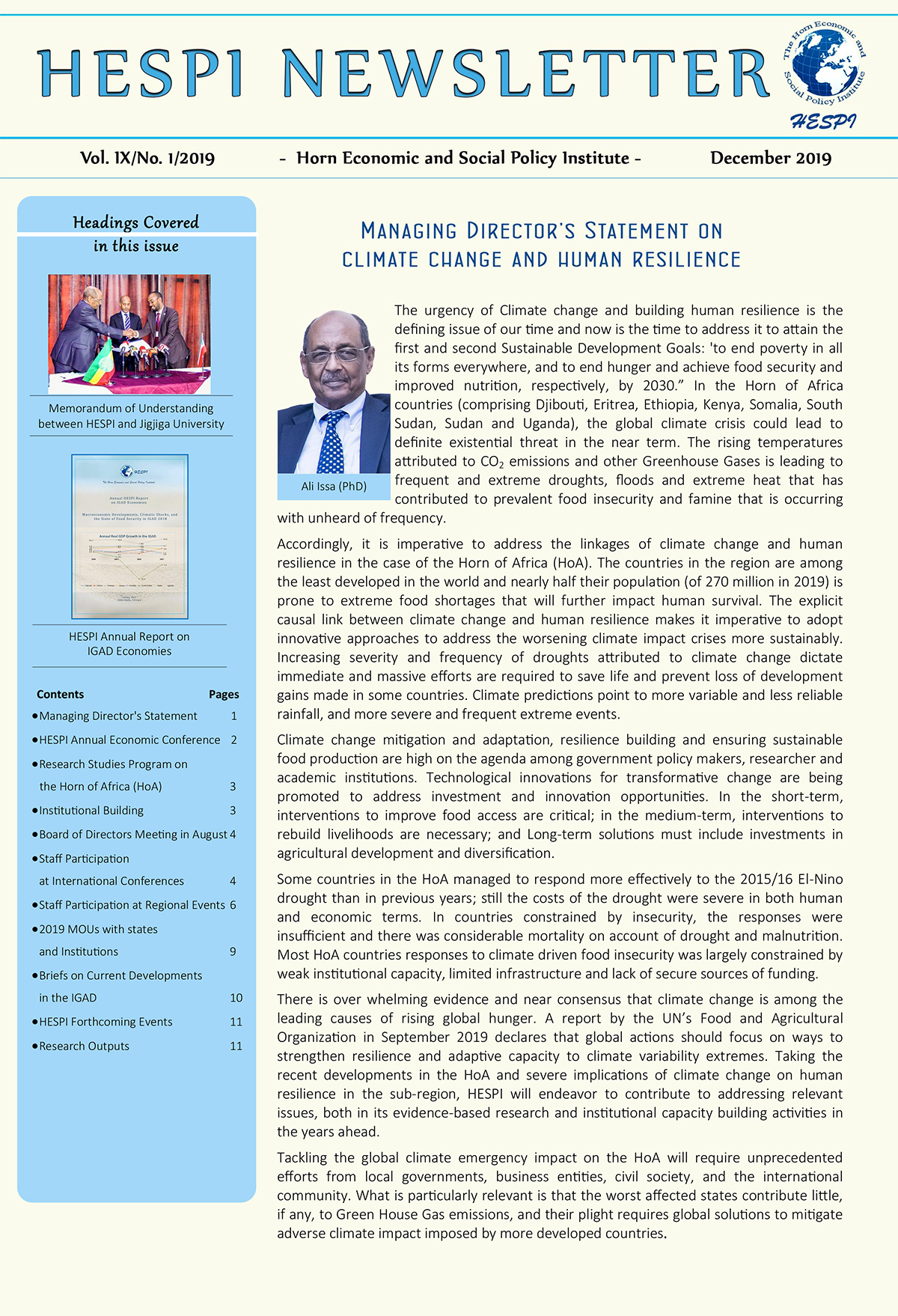 The urgency of Climate change and building human resilience is the defining issue of our time and now is the time to address it to attain the first and second Sustainable Development Goals: 'to end poverty in all its forms everywhere, and to end hunger and achieve food security and improved nutrition, respectively, by 2030.” In the Horn of Africa countries (comprising Djibouti, Eritrea, Ethiopia, Kenya, Somalia, South Sudan, Sudan and Uganda), the global climate crisis could lead to definite existential threat in the near term. The rising temperatures attributed to CO2 emissions and other Greenhouse Gases is leading to frequent and extreme droughts, floods and extreme heat that has contributed to prevalent food insecurity and famine that is occurring with unheard of frequency.

Accordingly, it is imperative to address the linkages of climate change and human resilience in the case of the Horn of Africa (HoA). The countries in the region are among the least developed in the world and nearly half their population (of 270 million in 2019) is prone to extreme food shortages that will further impact human survival. The explicit causal link between climate change and human resilience makes it imperative to adopt innovative approaches to address the worsening climate impact crises more sustainably.  Increasing severity and frequency of droughts attributed to climate change dictate immediate and massive efforts are required to save life and prevent loss of development gains made in some countries. Climate predictions point to more variable and less reliable rainfall, and more severe and frequent extreme events.

Climate change mitigation and adaptation, resilience building and ensuring sustainable food production are high on the agenda among government policy makers, researcher and academic institutions. Technological innovations for transformative change are being promoted to address investment and innovation opportunities. In the short-term, interventions to improve food access are critical; in the medium-term, interventions to rebuild livelihoods are necessary; and Long-term solutions must include investments in agricultural development and diversification.

Some countries in the HoA managed to respond more effectively to the 2015/16 El-Nino drought than in previous years; still the costs of the drought were severe in both human and economic terms. In countries constrained by insecurity, the responses were insufficient and there was considerable mortality on account of drought and malnutrition. Most HoA countries responses to climate driven food insecurity was largely constrained by weak institutional capacity, limited infrastructure and lack of secure sources of funding.

There is over whelming evidence and near consensus that climate change is among the leading causes of rising global hunger. A report by the UN’s Food and Agricultural Organization in September 2019 declares that global actions should focus on ways to strengthen resilience and adaptive capacity to climate variability extremes. Taking the recent developments in the HoA and severe implications of climate change on human resilience in the sub-region, HESPI will endeavor to contribute to addressing relevant issues, both in its evidence-based research and institutional capacity building activities in the years ahead.

Tackling the global climate emergency impact on the HoA will require unprecedented efforts from local governments, business entities, civil society, and the international community. What is particularly relevant is that the worst affected states contribute little, if any, to Green House Gas emissions, and their plight requires global solutions to mitigate adverse climate impact imposed by more developed countries.