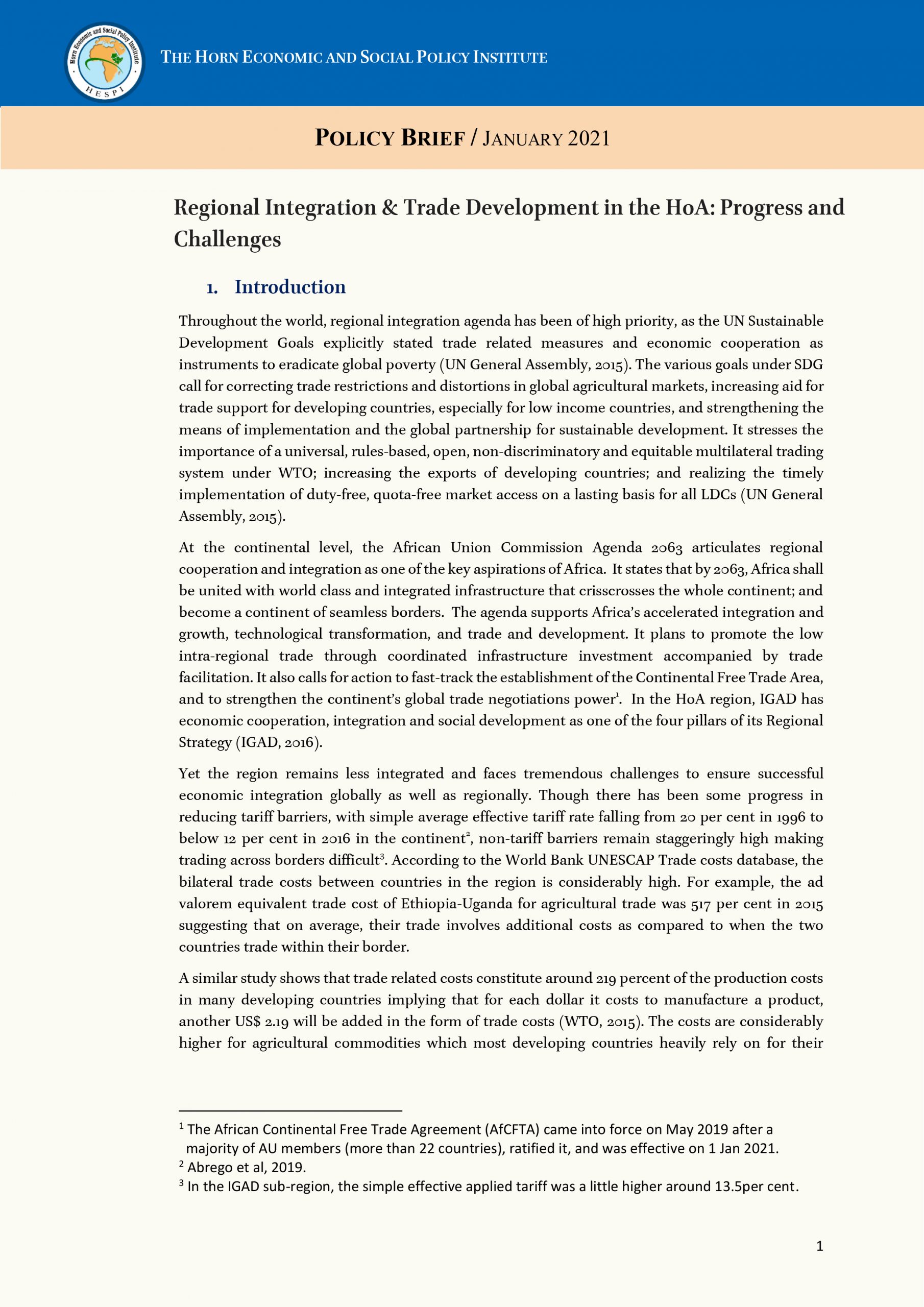 Regional Integration & Trade Development in the HoA: Progress and Challenges

Throughout the world, regional integration agenda has been of high priority, as the UN Sustainable Development Goals explicitly stated  trade  related  measures and  economic cooperation as instruments to eradicate global poverty (UN General Assembly, 2015). The various  goals under SDG call for correcting trade restrictions and distortions in global agricultural markets, increasing aid for trade support for developing countries, especially for low income countries, and strengthening the means of implementation and the global partnership for sustainable development. It stresses the importance of a universal, rules-based, open, non-discriminatory and equitable multilateral trading system under WTO;  increasing the exports of developing countries; and realizing the timely implementation of duty-free, quota-free market access on a lasting basis for all LDCs (UN General Assembly, 2015).

At  the  continental  level,  the  African  Union Commission Agenda  2063 articulates regional cooperation and integration as one of the key aspirations of Africa. It states that by 2063, Africa shall be united with world class and integrated infrastructure that crisscrosses the whole continent; and become a continent of seamless borders.  The agenda supports Africa’s accelerated integration and growth, technological transformation, and trade and development. It plans to promote the low intra-regional trade  through  coordinated  infrastructure  investment  accompanied  by  trade facilitation. It also calls for action to fast-track the establishment of the Continental Free Trade Area, and to strengthen the continent’s global trade negotiations power1.  In the HoA region, IGAD has economic cooperation, integration and social development as one of the four pillars of its Regional Strategy (IGAD, 2016).

Yet  the region remains less integrated and faces tremendous challenges to ensure successful economic integration globally as well as regionally. Though there has been some progress in reducing tariff barriers, with simple average effective tariff rate falling from 20 per cent in 1996 to below 12 per cent in 2016 in the continent2, non-tariff barriers remain staggeringly high making trading across borders difficult3. According to the World Bank UNESCAP Trade costs database, the bilateral trade costs between countries in the region is considerably high. For example, the ad valorem equivalent trade cost of Ethiopia-Uganda  for agricultural trade was 517 per cent in 2015 suggesting that on average, their trade involves additional costs as compared to when the two countries trade within their border.

A similar study shows that trade related costs constitute around 219 percent of the production costs in many developing countries implying that for each dollar it costs to manufacture a product, another US$ 2.19 will be added in the form of trade costs (WTO, 2015). The costs are considerably higher for agricultural commodities which most developing countries heavily rely on for their exports (Arvis et al, 2013). Intra-regional  trade between countries in the sub-region is thus low, not exceeding 15 per cent compared to 36 per cent in ASEAN, 64 per cent in EU (UNCTAD, 2019).

This policy brief draws on HESPI studies  that examine HoA countries’ progress in implementing the trade facilitation measures, the level of Non-Tariff Barriers (NTBs) and its impact on regional economic integration with focus on trade in the Horn of African economies