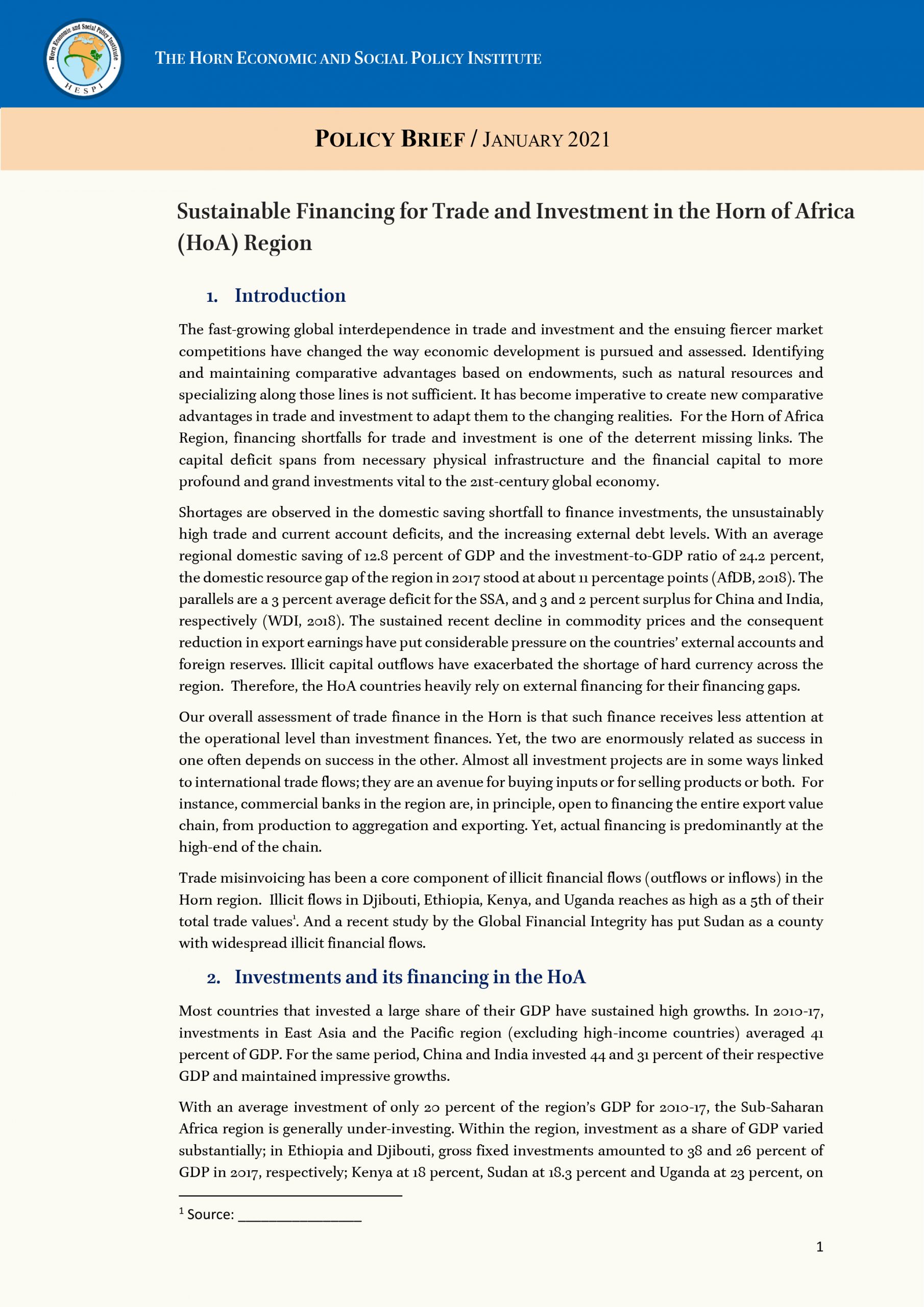 The fast-growing global interdependence in trade and investment and the ensuing fiercer market competitions have changed the way economic development is pursued and assessed. Identifying and maintaining comparative advantages based on endowments, such as natural resources and specializing along those lines is not sufficient. It has become imperative to create new comparative advantages in trade and investment to adapt them to the changing realities.  For the Horn of Africa Region, financing shortfalls for trade and investment is one of the deterrent missing links. The capital deficit spans from necessary physical infrastructure and the financial capital to more profound and grand investments vital to the 21st-century global economy.

Shortages are observed in the domestic saving shortfall to finance investments, the unsustainably high trade and current account deficits, and the increasing external debt levels. With an average regional domestic saving of 12.8 percent of GDP and the investment-to-GDP ratio of 24.2 percent, the domestic resource gap of the region in 2017 stood at about 11 percentage points (AfDB, 2018). The parallels are a 3 percent average deficit for the SSA, and 3 and 2 percent surplus for China and India, respectively (WDI, 2018). The sustained recent decline in commodity prices and the consequent reduction in export earnings have put considerable pressure on the countries’ external accounts and foreign reserves. Illicit capital outflows have exacerbated the shortage of hard currency across the region.  Therefore, the HoA countries heavily rely on external financing for their financing gaps.

Our overall assessment of trade finance in the Horn is that such finance receives less attention at the operational level than investment finances. Yet, the two are enormously related as success in one often depends on success in the other. Almost all investment projects are in some ways linked to international trade flows; they are an avenue for buying inputs or for selling products or both.  For instance, commercial banks in the region are, in principle, open to financing the entire export value chain, from production to aggregation and exporting. Yet, actual financing is predominantly at the high-end of the chain.

Trade misinvoicing has been a core component of illicit financial flows (outflows or inflows) in the Horn region.  Illicit flows in Djibouti, Ethiopia, Kenya, and Uganda reaches as high as a 5th of their total trade values. And a recent study by the Global Financial Integrity has put Sudan as a county with widespread illicit financial flows.