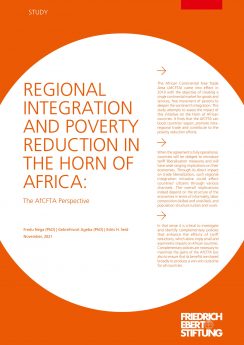 REGIONAL INTEGRATION AND POVERTY REDUCTION IN THE HORN OF AFRICA: The AfCFTA Perspective

African governments and their partner multilateral organizations including the World Bank and the African Development Bank recognized the imperative for an integrated and well-connected continent against the changing global landscape to fast-track industrialization and promote inclusive economic growth and development. For Africa, a vast continent of over 1.2  billion people, regional integration has considerable potential not only for  enhancing regional trade and  promoting robust and  equitable economic growth through integrated markets but  also  for  reducing conflict  and  ensuring peace and  security  (Matthews, 2003; Alexander  et  al, 2003). Currently, African  governments are  showing commitments to a continent-wide free trade area through the African Continental Free Trade Agreement (AfCFTA) which  aims at accelerating the continental integration agenda and bringing the continent into the global trading system as a well-connected and integrated continent rather than as individual countries as set out in Agenda 2063 (AUC, 2015). Agenda 2063 clearly states that by 2063, Africa shall be united with world class and integrated infrastructure that crisscrosses the  whole continent; and becomes a continent of seamless borders, and manages cross-border resources through dialogue. It plans to promote the low intra-regional trade through coordinated infrastructure investment accompanied by trade facilitation;  and  calls for  action to fast-track the  establishment of the  Continental Free Trade Area, strengthen the  continent’s global  trade negotiations power.

Regional integration, however, is not an end  in and of itself. It is only useful to the extent that it enables African countries to address  the development challenges they face, the most serious of which is how to achieve sustained growth and poverty reduction. Regionalism has played a vital role in fostering peace and security in Africa over the past few decades. However, fully exploiting its potential for economic development remains a challenge as evidenced, for example, by the prevalence of weak production and export structures in African countries, the increase in the number of poor people on the continent, and the low shares of regional trade in Africa’s total trade.

Recognizing the slow regional integration process and the need to address the fragmentation of the economies, 44 African countries signed a framework agreement to establish a single continental  market  (i.e., the  African Continental Free Trade Area, AfCFTA) for goods and services in 2018, with free movement of capital and business travelers. It entered into force in May 2019 after 24 countries had deposited their instruments of ratifications. Currently, 54 of the 55 AU member states with the exception of Eritrea have signed the agreement and 35 countries of the 54 signatories have ratified the agreement. From the Horn of Africa (HoA) countries, Djibouti, Ethiopia, Kenya and Uganda have already signed and  ratified the agreement; while Sudan, South  Sudan and  Somalia  signed  but  have  not  yet ratified. Eritrea is yet to sign and ratify the Agreement establishing the AfCFTA.