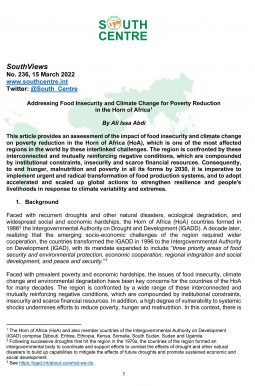 This article provides an assessment of the impact of food insecurity and climate change on poverty reduction in the Horn of Africa (HoA), which is one of the most affected regions in the world by these interlinked challenges. The region is confronted by these interconnected and mutually reinforcing negative conditions, which are compounded by institutional constraints, insecurity and scarce financial resources. Consequently, to end hunger, malnutrition and poverty in all its forms by 2030, it is imperative to implement urgent and radical transformation of food production systems, and to adopt accelerated and scaled up global actions to strengthen resilience and people's livelihoods in response to climate variability and extremes.

Faced  with recurrent  droughts  and other  natural  disasters,  ecological  degradation,  and widespread social and economic hardships, the Horn of Africa (HoA) countries formed in 19862 the Intergovernmental Authority on Drought and Development (IGADD). A decade later, realizing  that  the  emerging  socio-economic  challenges  of  the  region  required  wider cooperation, the countries transformed the IGADD in 1996 to the Intergovernmental Authority on Development (IGAD), with its mandate expanded to include “three priority areas of food security and environmental protection, economic cooperation, regional integration and social development, and peace and security.”3

Faced with prevalent poverty and economic hardships, the issues of food insecurity, climate change and environmental degradation have been key concerns for the countries of the HoA for many decades. The region is confronted by a wide range of these interconnected and mutually reinforcing negative conditions, which are compounded by institutional constraints, insecurity and scarce financial resources. In addition, a high degree of vulnerability to systemic shocks undermines efforts to reduce poverty, hunger and malnutrition. In this context, there is an urgent need for radical transformation of food production into more sustainable and nutritious systems.

Climate Change has emerged as one of the most critical development challenges in the HOA region, as it has a disproportionate impact on poor communities and households. It has already impacted sufficiency and food security, making the challenge of ending hunger and malnutrition even more difficult. Understanding food security and vulnerability to climate change is not only key to addressing climate change impact, but also to framing ways to adapt to climate risks and reduce vulnerability.

While there have been measurable increases in some crop yields, leading to expansion in food supply in some countries in the region, agricultural productivity in the HoA has not changed to significantly impact food production sustainability. As a result, the overall food supply in the region has remained low and below the minimum food requirements, leading to prevalence of undernourishment and food insecurity.

Climate change is one of the driving forces of food insecurity in the region. It primarily affects production in the agricultural sector, especially crop and livestock production. Beyond production losses, medium- and large-scale disasters can lead to significant impacts across the food value chain, with negative consequences on sector growth, food and non-food agro- industries, and ultimately on poverty reduction in the regional economies.

Hence, the accumulated costs of climate change on agriculture could be much more significant than the immediate production losses. A study by the Food and Agriculture Organization (FAO) found that after each medium- and large-scale disaster there is an average loss of 2.6 percent of national agriculture value-added growth, with a much more significant impact likely at subnational levels.

As of 2019, close to 70 million people suffered from hunger in the HoA, corresponding to about one in every three people in the region, compared to the global level that has been at a level slightly below 11 percent4 . Since 2020, the number of people facing acute hunger and endemic poverty has increased significantly on account of the COVID-19 pandemic impact on the health systems and economies of the sub region, indicating the immense challenge posed to achieve the Zero Hunger target by 2030.

Achieving a resilient society that adapts to changing environmental conditions is an important part of meeting the Sustainable Development Goals (SDGs) and poverty reduction across wide segments of the population. It is critical to take a long-term perspective on how to reduce vulnerability and to increase drought-resilient human and socioeconomic development efforts among the HoA’s poorest communities. Designing effective interventions is a matter of building the resilience of people and requires sustainable poverty reduction.

In the recent past, interventions made in the region to build a resilient livelihood system were highly fragmented and small in coverage and impact. The approach lacked a systemic view where interventions can be coordinated and lessons  learned possibly mainstreamed to existing development programs. Consequently, critical policy formulations to enhance adaptation to climate change and to  build resilience  including  risk  management,  social protection, market stabilization and livelihood diversification, were not effectively implemented.

In view of the expected increase in the magnitude of adverse climate change impact, robust adaptation  in  the countries  of  the  HoA  will  require  strong  institutions,  cooperation  and harmonization of activities of concerned institutions and support from concerned development partners, considering the insufficient resources available for adequate responses by the governments and the intertwined complexity of reducing poverty. Accordingly, national adaptation planning should strengthen institutions critical to helping countries adapt to climate change. In particular, two critical institutional challenges that should be tackled are: (i) lack of coordination for policy implementation and weak linkages among the different actors and stakeholders; and (ii) limited technical capacity at all levels including governments and other actors, as reflected in the lack of long-term planning in climate change adaptation and mitigation, which is a major constraint on policy implementation at the local level.

Food insecurity challenges in the HoA thus call for establishment of the Integrated Climate- Response System to build resilience. Such integrated resilience building will help boost overall risk-management capacity by reducing fragmentation of programs and institutions, and link with early warning and emergency systems. It aims additionally to foster participatory planning and social accountability, and paves the way for countries in the region to collaborate on joint actions and investments on resilience building measures that benefit communities in similar eco-systems across borders.

2 Following successive droughts that hit the region in the 1970s, the countries of the region formed an intergovernmental body to coordinate and support efforts to combat the effects of drought and other natural disasters to build up capabilities to mitigate the effects of future droughts and promote sustained economic and social development.